Sonic was bred by Wendy Tisdall of the Coastalight Kennel in Nanaimo, BC on Vancouver Island. She was from a litter of 10 puppies: 7 boys, 5 of them black and 2 liver, and 3 girls, all black. They were born on August 14, 2011. Adele flew out to pick out her new puppy on a Tuesday and flew home with Sonic the following Sunday.

Almost as soon as we got back home to Michigan, I started training Sonic in front of a video camera. I started uploading these videos to YouTube, and have amassed a large library of short training videos under my Adele Yunck YouTube channel. You can see them here. They are mostly under the tag ‘Sonic the FCR’. They show Sonic in the early stages of learning many exercises or pieces of exercises needed for obedience competition and hunt test work, as well as her progress through various stages of competition in Rally and obedience.

Sonic is an athlete, through and through. She is 24″ tall at the withers and weighs about 63 lbs. She has an outstanding Flat-Coated Retriever temperament. She has a lovely head piece with dark eyes, a lovely topline and tail set, and beautiful tight feet. My main goal in breeding her to Arrow was to improve on her movement, especially her rear, as she is a bit close. I’m very pleased with the puppies from her first litter.

Sonic won High in Trial out of the Novice B classes all 4 days at the Strawberry Cluster in Lakeland, Florida in February 2014. She was also Reserve Winner’s Bitch on the last two days. 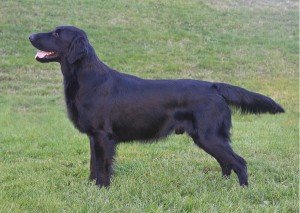 Dash was Winners Dog at the 2014 FCRSA National in Oregon and BISS at the FCRSC National in 2014.

Daisy was Winners Female at the 2006 FCRSC National Specialty under Per Iverson. 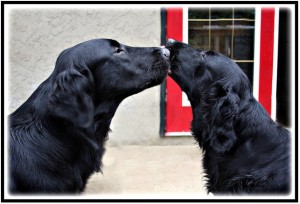 Sonic went from her CD to her UD in 2014, starting at just over 2.5 years old, with 4 HITs along the way. She earned 40+ OTCh points in the following 2 months. She completed her SH just after her 2nd birthday in 2013, and earned her MH, going 5 for 6 from mid-August to late-October in 2015, starting soon after her 4th birthday. She earned OTCh points the weekend before finishing her MH and conformation points the following week, showing her versatility. She finished her breed championship about 6 weeks after her MH.

In obedience, Sonic has earned 21 UDX (utility dog excellent) legs. She has finished her OM3 and is well on her way to her OM4. She has a total of 84 OTCH (obedience trial champion) points as of November 2017.