My 2nd litter of puppies out of Sonic, this time sired by GCh Ch Fleetwing’s Force of the Moon (Tide), was born on Wednesday February 21, 2018. Sonic had the first one at 9:30 AM and finished up at about 2:00 PM. There are 8 puppies, 7 girls and 1 boy. They are six days old as I’m writing this. We have done 4 days of ENS (Early Neurological Stimulation) and 3 days of ESI (Early Scent Introduction) so far. I’ll do Day 4 of ESI this afternoon.

Since they were born during the Winter Olympics, I have named them for various winter sports terms. In birth order, they are:

You can follow their growth here. The page gets updated automatically “about once a day” (so the software says). My thanks to my friend and fellow geek Kate Weber for setting this up for me!

Some things I did with my first litter:

I plan to do all of these things with my February 2018 litter.

Sonic had an ultrasound on Monday January 15, 2018 to confirm that she is pregnant and expecting at least 9 puppies! This litter is sired by Tide (BIS U-Ch, Can/Am GCh Fleetwings Force of the Moon). They are due on February 21, 2018. Having helped raise a friend’s litter sired by Tide, I am very excited for this litter. I’ll be updating the website more soon. If you are interested in this litter, please fill out my puppy questionnaire and drop me an email to this address: Adele’s email 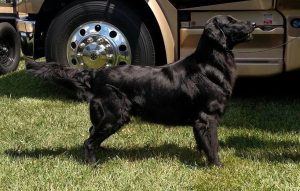 On Tuesday March 8, I started feeding the puppies a mush made of ground kibble, water and goat’s milk. Helen Szostak of Grousemoor Retrievers, who has been such an incredible help to me in this breeding journey, saw them at lunch time that day. More importantly, she heard them...

END_OF_DOCUMENT_TOKEN_TO_BE_REPLACED

Sonic’s breeder Wendy Tisdall is an accomplished photographer and has many beautiful pictures on her Flickr site. Here is an album of Sonic and her littermates growing up. Sonic was the hot pink collar girl. I especially love the series of the puppies with their funny right-angle droopy tails.

On Day 5 of Early Scent Introduction, I used some vanilla on a cotton pad. Here’s a video of the puppies’ reactions

On Day 6 of ESI, I used rosemary. They were almost all quite captivated by it. Here’s the video.

On Day 7 of ESI, I used a wooden dumbbell. I didn’t expect much reaction, as it has very little of its own scent. Here’s the video.

On Day 8 of ESI, I used a hank of a horse’s mane hair, thanks to Karen Bell supplying it. They really seemed to love it. Here’s the video.

In case you don’t this about me, I’m a computer geek. I majored in Computer Science in college and worked as a programmer for nearly 5 years before quitting to start Northfield Dog Training. Part of my geekiness comes out in my love of spreadsheets. I’ve been keeping a log of each puppies’ weights twice a day since they were born. The little green boy, Lil Pea, has been getting measured more times a day, to monitor his gains more carefully. Here is a chart I made in Excel of their 1st week’s weights:

On Monday February 22, the puppies’ 3rd day, we started both ESI – Early Scent Introduction – and ENS – Early Neurological Stimulation. For the ESI, I am introducing the puppies to a novel scent for 5 seconds to see how they react. I am following recommendations from the Avidog course Your Litter A to Z.

On February 22, the first day of both ESI and ENS, I used a small branch from last year’s Christmas tree. A few noticeably settled and scented, sniffing audibly. Here is a video of Day 1.

On the 2nd day, February 23 I used a handful of straw left over from a Barn Hunt trial in January. Most of the puppies were complaining about my waking them up, and there was a lot of hollering going on, but most of the puppies shut up and sniffed audibly when presented with the straw. It was quite a different result than Day 1. Here is a video of Day 2.

On February 24, the 3rd day of ESI and ENS, I used a thawed pigeon from my freezer storage. It did not elicit as much interest as the straw had. Here is a video of Day 3.

On Day 4, I used a cinnamon stick. Several of them seemed quite interested in it. Here is a video of Day 4.

We lost power last evening for about 2 hours due to high winds, which made me very grateful that the puppies were already born. Whelping by flash light and book lights would not have been fun! I clipped a blanket over the top of the whelping box to help retain heat, and while the temperature did drop some in the whelping box, it never went below 67. I had to pull it back some because Sonic started to get too warm.

I think the puppies woke me up at least once every hour of the night last night, with someone fussing a bit, usually because Sonic had gotten up and moved around. Except for the littlest boy (green), all the rest gained at least some weight over last night. Pink girl, who had lost a bit from birth to last night’s weighing, gained an ounce overnight, the most of all nine. Little green has been getting some semi-private nursing time today to try to give him a boost. Solo time doesn’t work because then Sonic insists on licking him so much that she knocks him off the nipple, which defeats the purpose.

As mama and puppies figure out this living together in the outside world thing, it has turned into a mostly peaceful day in the whelping room. Big Bubba’s tail wags as he nurses, and I’ve seen several of their tails doing this kinked thing that Sonic and several of her littermates did when they were about 3 months old.

I am thoroughly enjoying spending time helping Sonic and just watching the babies figure out how to get where they want to go. Sonic is getting smarter about how to lie down so she doesn’t squash them, but I still try to stay near to help her get them sorted out.

We took a < 5 minute trip around our yard this afternoon to give her a mental break and a chance to run a bit, which she very happily did. Now she’s back in the box with the gang of grunting and squeaking parasites. Good Mama!

We have been having internet problems since the power outage, which I think is fixed. I have a video I hope to get posted to YouTube to share.

Sonic gave birth to 9 puppies between 8:30 AM and 2:00 PM today! Right on schedule AND during daylight hours. She’s such a good cooperative girl. Seven boys and two girls. The first one, a boy, weighed in at a hefty 18 oz. The smallest is 9.5 ounces. Sonic seems to have figured out her job very quickly and the babies seem active and to have figured out their job of eating and sleeping.