Sonic’s temperature has been a bit lower today than yesterday. She has been licking her belly a lot today and has a bit of milk coming in. She didn’t want to eat her mid-day meal, but she did just eat some dinner. She has done some digging in the whelping box and is looking distinctly uncomfortable most of the time. She’s doing some panting, too. I hope for her sake that she whelps in the next 24 hours, but I suspect it will be more like 48 hours. But, heck, what do I know???

I spent a fair bit of time today finishing up preparations for the puppies arrival, including clearing as much extra stuff out of the whelping room as possible. I was able to install a baby gate in the doorway, while still allowing the door to shut.

We did go for nice walk in the bright morning sunshine. Sonic can still run, albeit without her usual grace. Here’s a brief video clip I took before we started our walk this morning.

Last night, Sonic and I slept in the whelping room to start getting her used to sleeping in the whelping box. She was a good girl and settled in it well. I’m glad I did, as it was COLD in there. I don’t think Sonic minded, but it was bad enough that I checked the heating vent at 1:30 am and discovered I’d shoved a box over the top of it. That helped explain it! I moved the thermometer in there this morning, so I’ll have a better idea of what it really is tonight.

I’ve done some more sewing of box liners today, finishing up the big 4 x 4 foot furry fleece one and getting a smaller quilted one done.

I have also slowed down the exercise efforts some this week, going on off leash runs instead of biking, so she can rest when she wants to. It is so strange seeing my gazelle thickening so much and slowing down. It is harder for her to lie down and get up than usual.

Sonic has been wanting to rest on my lap in the recliner lately, which is unusual. I have started to feel the puppies moving, which is terrically exciting.

I’ve added more pictures to the Expanding Waistline post. It is astonishing seeing her waist expand by 1/2″ to 1″ a day.

Today, I made a lot of progress on the whelping room. We – my son Ryan and I – got the big old tube TV out of the room, and the bed where I’ll sleep the first several nights put together. Then I put down the piece of vinyl flooring and got the whelping box that Helen Szostak loaned me assembled.

The pictures aren’t the greatest, but here is the progression so far of Sonic’s expanding waistline. I’ve gotten her switched over to a different, higher calorie food, and she’s eating more volume and more frequently. She’s really expanded a lot this week. It’s impressive! She is still eager for her off-leash runs and other exercise, but I suspect I’ll see some degree of slowing down in the coming two weeks. 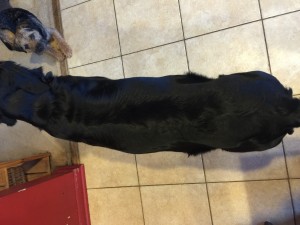 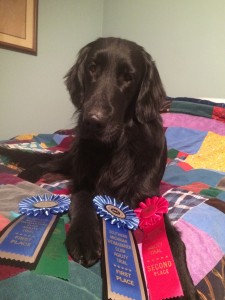 On January 30, puppy daddy Arrow added another Open standard and Open JWW leg to those already earned. One more on each for the titles!

Sunday update: Arrow finished his OA title today, and a single bar down prevented the completion of his OAJ. Heidi and Arrow will be working to finish up the title next weekend.

Today, I headed to Lowe’s. I bought a 6′ x 10′ piece of vinyl flooring for under the whelping box and later on the bigger puppy pen. I hope it has decent enough traction for the babies. I also got a couple of packs of puzzle piece foam matting and a 10′ x 12′ tarp in case the vinyl flooring proves to be to slippery.

Then I headed to Joann Fabrics in search of some whelping box lining material. Decades ago, I did a lot of sewing of equipment for showing my horses, including nice flush fleece – not the polar fleece kind that is so popular now, but the type that crate pads are often made from. I had to ask one of the clerks where to find it. I did find some, though nowhere near as plush as what I used in the past, but it should be much easier to sew and wash.

When I got home from those errands, my son helped me move and reassemble the twin-sized bed that I’ll use during the early nights after the puppies are born. Things are gradually taking place! 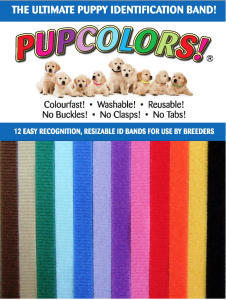 Yesterday, I ordered some pup color puppy marking collars from www.pupcolors.com. Should be more than enough!

Today, I ordered some more of one of the supplements that I have been giving Sonic based on Avidog’s recommendations.

I also ordered 6 maxi garden trays for eventual use as potty boxes for the babies.

On Sunday, I’m going to my friend Helen’s house to borrow her whelping box and various other items we’ll be needing next month, both for whelping and for growing puppies. I’m also in search of a puppy food, since I will be switching Sonic over to that when she’s two weeks from her due date, to provide more calories for the growing babies. 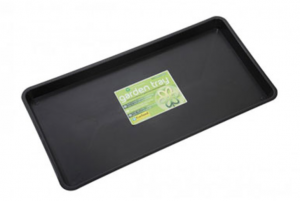 Heidi Hebert showed Puppy Daddy Arrow to two Grand Champion Select awards this weekend at the big dog show in Novi, Michigan from Thursday-Sunday. Sonic stayed home to grow the babies. We (Sonic, Jag, and I) went for nice long runs – well, the dogs ran while I walked – in the neighboring farm fields after we got home from the dog shows this weekend. Her pregnancy doesn’t seem to be slowing Sonic down any yet, but her waistline is definitely changing. Her tuck up is going away!

While at the dog shows, I bought a puppy bed, some 4′ x 4′ pads for the whelping box, and a bag full of puppy toys that will be very hard for Sonic to resist.

In early January, I resumed biking Sonic – she is attached to my Springer thingie which is attached to the bike – in my training building. It is a bit on the boring side riding around in big circles, but she is a lot calmer about it inside than when we ventured outside last spring for a few kamikaze rides down our dirt road. She likes to carry a large toy while she trots along with me. We are up to 25 minutes of trotting, and have been managing to get this in 3 times a week. We have also gone out for a 30-40 minute off-leash run in a neighbors field one day each weekend this month.

Last winter, I got a dog gym set up in an unused area upstairs in my big training building. There are cavalettis set up all the time, my big red peanut, a Bosu ball, half of an extension ladder, and various other pieces of equipment. I used it consistently from January – April 2015, and then we moved outside for field training, and that consumed us. We have resumed 3 times a week strength workouts, where we do each piece of equipment or exercise for a short amount of time (currently 35 seconds) and then move on to the next exercise – kind of modeled after the Curves for Women workout I did for several years. The dogs love it, as there are lots of cookies involved. I was told that good core strength makes the whelping process easier on an expectant mother, so I’m doing my best to improve that for Sonic.